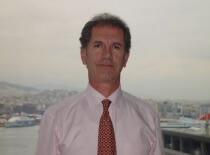 Tasos Makris is an Information Systems & Usability specialist. He holds a BSc in Physics and a Masters of Computer Science. He has worked for 5 years in the Health sector in the U.K. and for 10 years in the Greek Industry Automation Sector (Hercules Cement Corp/Amber sa) as Project Manager, before joining the Maritime Sector in 1993 where he worked for Gourdomichalis Maritime as Information Systems Director.
He has been involved with issues in Human Computer Interface and Software Usability principles since the mid ‘80s, as a means to improve the quality of software and human productivity. He applied extensively these principles during his career in software development and maintenance as IT Manager and has presented his work and ideas in various maritime conferences and has given yearly lectures to students of the Faculty of Communication & Media Studies of the University of Athens on Usability and UX topics on their importance and application in our everyday life.
He is a founding member of the group which organizes every year the celebration of World Usability Day in Greece since 2008 and has been a member of its organizing committee since then (usability.ntlab.gr)

Recently he was appointed by the Hellenic American College in Athens as Adjunct Lecturer to teach Systems Analysis & Design (with emphasis on User Interfaces), to undergraduate and postgraduate students.
During the last year, he refined the technique of Usability Assessment to assess software applications, with a special mindset on Maritime ERPs. Usability Assessment can rapidly reveal pain points in software that have become habits at the cost of productivity. The effectiveness and efficiency of software (especially the vessel software) is often overlooked. Featuritis (overloading software with features) is a common disease of modern software as the “ease of use” and other important human factors are being neglected. A frustrated and angry user can make costly mistakes, and this is where a Usability Assessment can help.