The present paper examines the potential of the implementation of theatre directing theories onto the design of human-computer interaction, especially in the case of digital humans, and whether the emergent practices produce differentiated, aesthetically coherent experiences. It also suggests the exploration of dramatic/performative horizons for IVAs.

The recent advancements in the fields of artificial intelligence, machine learning, natural language processing and computer graphics have resulted to the design and development of intelligent virtual assistants, known as IVAs, that exhibit numerous humanlike traits. Such traits pertain to personality, physical appearance, gender and other characteristics, typically exhibited by humans  [1], [2].

The systematic approach of the same traits, their aesthetic organization and repeatable exhibitability in a theatre performance, has been the objective of theatre directing theories and acting methods [3]. These aspire at rendering the performer/actor an able, intelligent “machine, producing aesthetically coherent performative results. Hence, theatre directing theories may hold some interesting keys in the designing of interactive experiences with digital humans, situated within the general discourse between Computers and Theatre [4].

This paper supplements our Dual Claire experimental project, also exhibited within the framework of CHIGreece 2021, which focuses on the potential of “directing” digital human agents according to theatre directing theories, while shedding light on the differentiated, aesthetically coherent dramatic and performative outcomes, aiming at opening up new horizons for IVAs performance.

Intelligent embodied and disembodied machines may exhibit theatrical and performative elements in their optimal performance as social agents [5]. The role of intelligent technological nonhuman may be expanded in the cocreation of artmaking and coperformance, leading to the emergence of hybrid artistic practices [6]. IVAs have been included in theatre performance, as the are capable of interactive storytelling [7].

Dual Claire evolves around the adoption of two different theatre directing theories in the development of two interactive experiences with a UneeQ’s digital human, namely Stanislavski’s realistic approach and Artaud’s surrealistic one . An opportunity to comparatively observe the differentiated aethetically coherent outcomes manifesting both on a dramatic (scenario and script) level as well as on a performative, behavioural level of the digital human thus emerges.

Our digital human is an “avant-garde” IVA-performer that showcases how an artistic approach based on theatre directing methodology in designing IVAs may pervade their usual scope and create a differentiated, aesthetically coherent result. The key research questions addressed are “how the implementation of two different theatre directing theories affects the designing of an interactive experience with a digital human within a commercial services context?”; “what are the challenges emerging in terms of directing, acting and script?”; and “does the adoption of certain theatre directing approaches lead to a differentiated, aesthetically coherent digital human performance, manifesting in drama and performance?”.

Τhe UneeQ Digital Humans trial version platform was chosen as the main tool for the experiment after some research as it meets the basic requirements, i.e. real-time human-computer interaction with natural language (spoken & written), machine learning, variety of emotional responses and realistic graphics. Additionally, Google Dialogueflow was used for the design of the dialogues.

Two linear scripts, inspired by the methods of the two widely renowned theatre directors were first conceived and then transformed into multi-linear, following a logic of “multiple improvisational rehearsing”. The central scenario wants Claire, the character of our digital human, to be an assistant at the fictional Kouros lounge bar on the island of Paros. The meaning load delivered in both versions remains almost the same, following different dramaturgical aesthetics in each case. In order for the two versions to be compared more efficiently, the strategy of changing solely the character of the text and the emotes of the digital human has been opted for, with the spectacular aspect being kept identical (space, digital human face, hairstyle e.t.c). The emotional aspect of human-computer interaction was addressed by attributing to the digital human emotes from the range of those offered by UneeQ.

The initial hypothesis that the adoption of a specific theatre directing theory results to a differentiated, aesthetically coherent digital human performance was verified. Virtual assistants are in position to perform according to a theatre directing theory even within their usual commercial context; such a performance whets our appetite for future more, even artistic, endeavours. 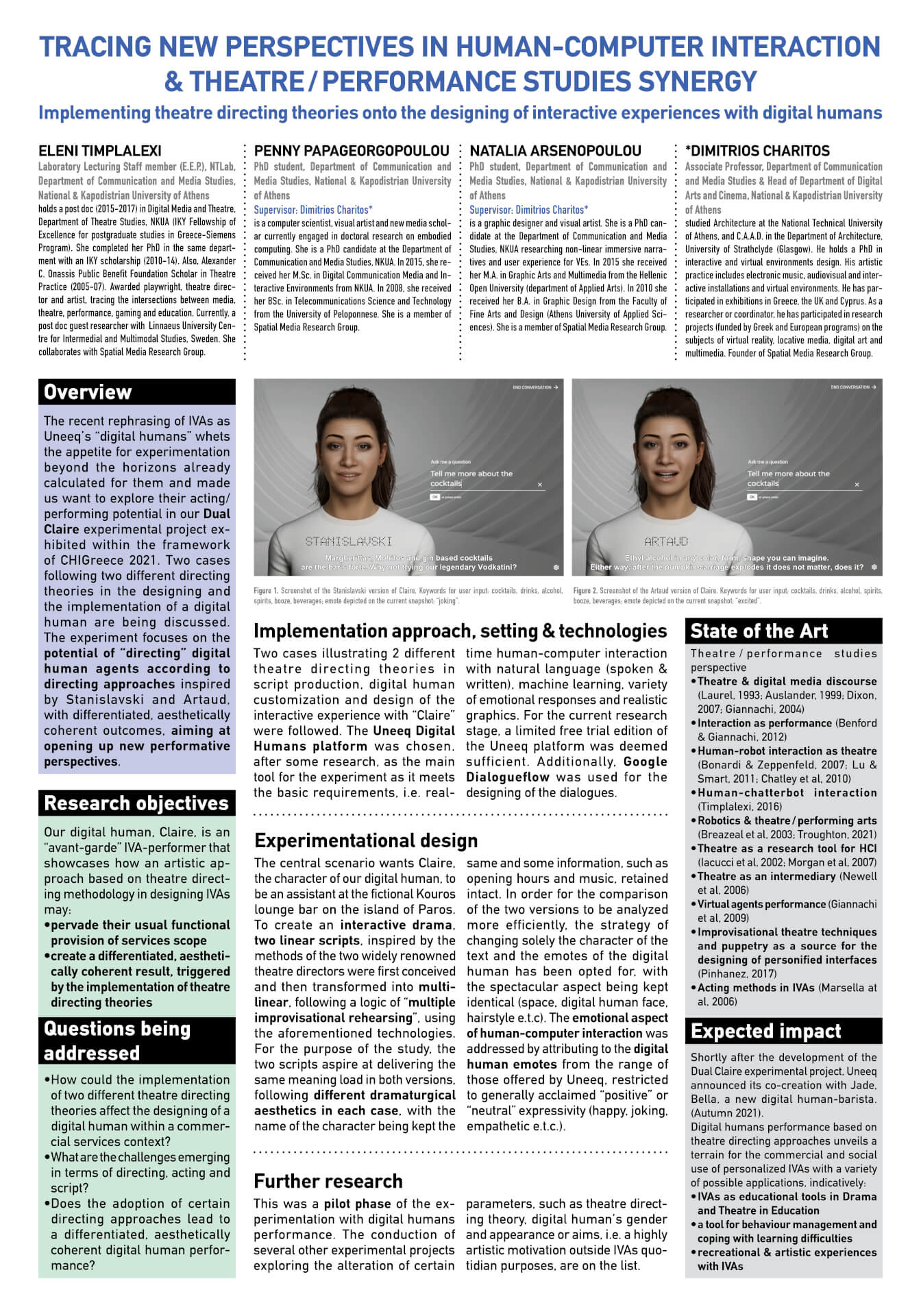