Computerized Simulators for the Marine Industry the case study of SES, a game-engine based environment

In the last 20 years, the marine traffic in Greek islands and coastal towns has been increased, as well as the marine accidents. Such accidents are characterized as extremely severe, with a high number of casualties due to the presence of numerous untrained passengers, the big proportion of families with underaged children and elderly people, and the isolated environment of the incident, where help is not available fast (Niininen & Gatsou, 2008; Goulielmos et al.,2009; Papanikolaou et al., 2004). This study aspires to provide the marine industry with a methodology for the development of Ship Evacuation Simulators for maritime vessels of different categories, aiming to reduce the human casualties, when accidents occur, by assessing and testing evacuation scenarios, by training evacuees and staff members, and by evaluating the safety of vessels and installations. Therefore, the hypotheses of this work are comprised of the use of Game Engines for the development of Evacuation Simulators (ES) and Serious Games, the real-time simultaneous participation of human users, and computer-controlled bots as evacuees, and the application of Gamification and Edutainment to ES and SG for training purposes.

The Serious Games and Evacuation Simulators are divided into two or three-dimensional. Two-dimensional simulators do not support full spatial representation and the evacuees are represented as dots or artifacts; therefore, the real-time participation of human users is extremely unlikely. Three-dimensional ones provide a full spatial representation of the environment, allowing the direct participation of users in the evacuation process. In this work, the focus will be on the latter. Several existing evacuation simulators have been reviewed for the needs of this study. The ACSIT-DPM VR System simulates fire emergency evacuation drills, providing emergency evacuation training, and a virtual avatar, controlled by a player who may perform firefighting tasks (Ren et al., 2006). Another interesting approach is the Three-Dimensional Serious Game EVA, a pedestrian simulator to assess evacuation dynamics and test the evacuees’ behavior in fires (Ribeiro et al., 2013; Silva et al., 2013; Silva et al., 2013, May). Finally, another 3D application is VELOS, an evacuation simulator on maritime vessels, focusing mainly on improving the design and comfortability of ship before they are being built (Ginnis et al., 2010; Kosta et al., 2011; Kostas et al., 2014).

To this end, existing Evacuation Models, and more specifically the Panic (Sime, 1983; Weinberg, 1978), the Affiliation (Kobe et al., 2010), and the Protective Action Decision (Tepstra & Lindell, 2013) models are evaluated, focusing on the two latter, due to their innovative and novel approach, while the Panic model is considered an obsolete approach and does not reflect real evacuation incidents. Therefore, the modeling method for this work is a combination of the Affiliation and Protective Action models. Based on the Modelling Method, evacuation features that match the needs of this work are defined. Such as the Counterflow, the Bottlenecks (Wang et al., 2015), the Congestion, the Fire and Smoke (Ronchi et al., 2018) features (Yi-Fan et al., 2011) are selected, and their mathematical expressions are evaluated. Moreover, human behavior and its expressions such as Social Influence, Herding, and Leadership are also discussed, and their mathematical modeling is reviewed (Lee et al. 2004; Wang et al., 2017). Additionally, the element Gamification is introduced and its application in evacuation simulators is evaluated. Gamification is considered a critical addition to simulators, as it motivates the users to participate, through immersion, encouraging more realistic behavior (Ermi & Mayra, 2005; Detering et al., 2011). Based on the collected information, a guide with the guidelines for the development of Three-Dimensional Multiplayer (or Single Player) Ship Evacuation Serious Games/Simulators on Game Engines follows up.  The two most popular ones, the Unreal Engine 4, and the Unity Game Engine are proposed as development environments, while other Game Engines and OpenGL are also assessed. The Game Engines are evaluated as development tools and the features that match our needs are highlighted. After extensive testing and based on the experience from the development of a 3D Serious Game/Evacuation Simulator, a Game Engine, suitable for ES development ought to support 2D and 3D perspectives, player avatars/characters, collision detection, a reliable physics engine, models importation, networking, and lighting. The method to test the hypotheses of this study is the development of a Three-Dimensional Evacuation Simulator, using Unreal Game Engine, that supports the participation of human users and gamification elements have been introduced. The results will be compared with data from existing ES and past evacuation incidents. Moreover, SES was tested as a training framework, using Gamification and Edutainment to keep the users’ immersion high for a longer time.

The architecture and the function of the Ship Evacuation Simulator, a Three-Dimensional, Multiplayer, Lightweight, Ship Evacuation Simulator/Serious Game (SES) developed in Unreal Engine are reviewed and proposed as the backbone of the studies hypotheses. The virtual world is a maritime environment, and the evacuation scenario runs on ships. The default vessel, that was used for the development and testing of the hypotheses is a 3D model of the Express Samina Sea Ferry (Goulielmos, et al., 2009), sunk in September of 2000, with a high number of casualties. The simulator supports two modes: The administrative and the player modes. In the administrative mode, a user can create scenarios, setting their parameters, such as the type among Single Player only, Single Player and Multiplayer, the number of bots, the lighting, the movement of the ship, and the time of the scenario. The administrator can also spawn events and elements such as fires, smoke, and poisonous gases in real-time. Every scenario is concluded with the collection and display of the evacuation scenario outcome, which displayed the total number of the evacuees, the casualties by cause and evacuee type, and other evacuation-related information. The player mode allows the players to impersonate an evacuee among 6 types (Male Adult, Female Adult, Male Old, Female Old, Male Teen, Female Teen) with different capabilities in speed, stamina, and size. One of the fundamental concepts of SES is the simultaneous participation of human players and computer-controlled bots, therefore the human player may co-exist with bots-evacuees. The bots are controlled by a pathfinding and navigation algorithm, that finds the best exit and then follows the shortest and most accessible path to an exit, or one that the bots are most familiar with. The bots are also affected by social influences and tend to follow or avoid situations, such as blocked doors, elements such as fires, and people based on their behavior and status. Features such as the Congestion, the Counterflow, the Leadership, the Staircase Delay and Speed Difference etc. are applied and affect the stamina and speed of the evacuees when being in the affected area.

The serious game/simulator is experimentally validated with the conduction of evacuation scenarios, that how the simultaneous participation of human players and computer-controlled bots affect the evacuation, the influence of the evacuation elements, events, and time, and their correlation with the number of casualties compared to the successfully evacuated people. The results are divided into three sections. The Simulation-only Mode, where the evacuees crowed was composed only by computer-controlled bots, the Single Player Mode, where only one human player could participate, and the Multiplayer Mode, where a higher number of human players participated. The Multiplayer mode provided results closer to the anticipated compared to real evacuation incidents and experimental data from other simulators. Moreover, as the allowed evacuation time was decreased, the casualties were proportionally increased up to a low of 22% for a 10-minute evacuation time, while scenarios with no time limit increased the survivability to 94%. An increase in the number of evacuees (n) resulted in a decreased Survival Rate (SR) and more specifically n=472 - SR=88%, n=60 (without illumination) – SR=43%. In the Multiplayer scenarios for an n=473 the SE=94% without a time limit to a SE=22% for a 10-minute time limit, producing results as expected based on past evacuations and other experimental data. Immersion was measured based on the answers of the human players with results ranging from 100% to 83% for 3 to 7 minutes of participation. Moreover, the users focused on their goals and felt motivated to participate and escape, as expected. This concludes that Gamification helps the user to immerse in the virtual world and provoke realistic reactions. Prolonged scenarios of over 10 minutes cause the user immersion to be decreased, therefore should be used for short scenarios. Moreover, the evacuees improved their performance increasing the survival rate from 45% to 71%, indicating that the user is trained to escape more efficiently and familiarize themselves with the structure.

The SES aspires to assess the Game Engines as development tools for Evacuation Simulators, while proposing the simultaneous participation of humans and bots, in full 3D perspective, with real-time events and an algorithm that implements the bots with human-like logic and behavior, towards the training of evacuees on critical conditions. Moreover, SES test the application of Gamification and Edutainment to Evacuation Simulators and Serious Games. In the future, machine learning to the bots allows them to learn, as they navigate the evacuated area and options for firefighting and evacuation training will be applied. 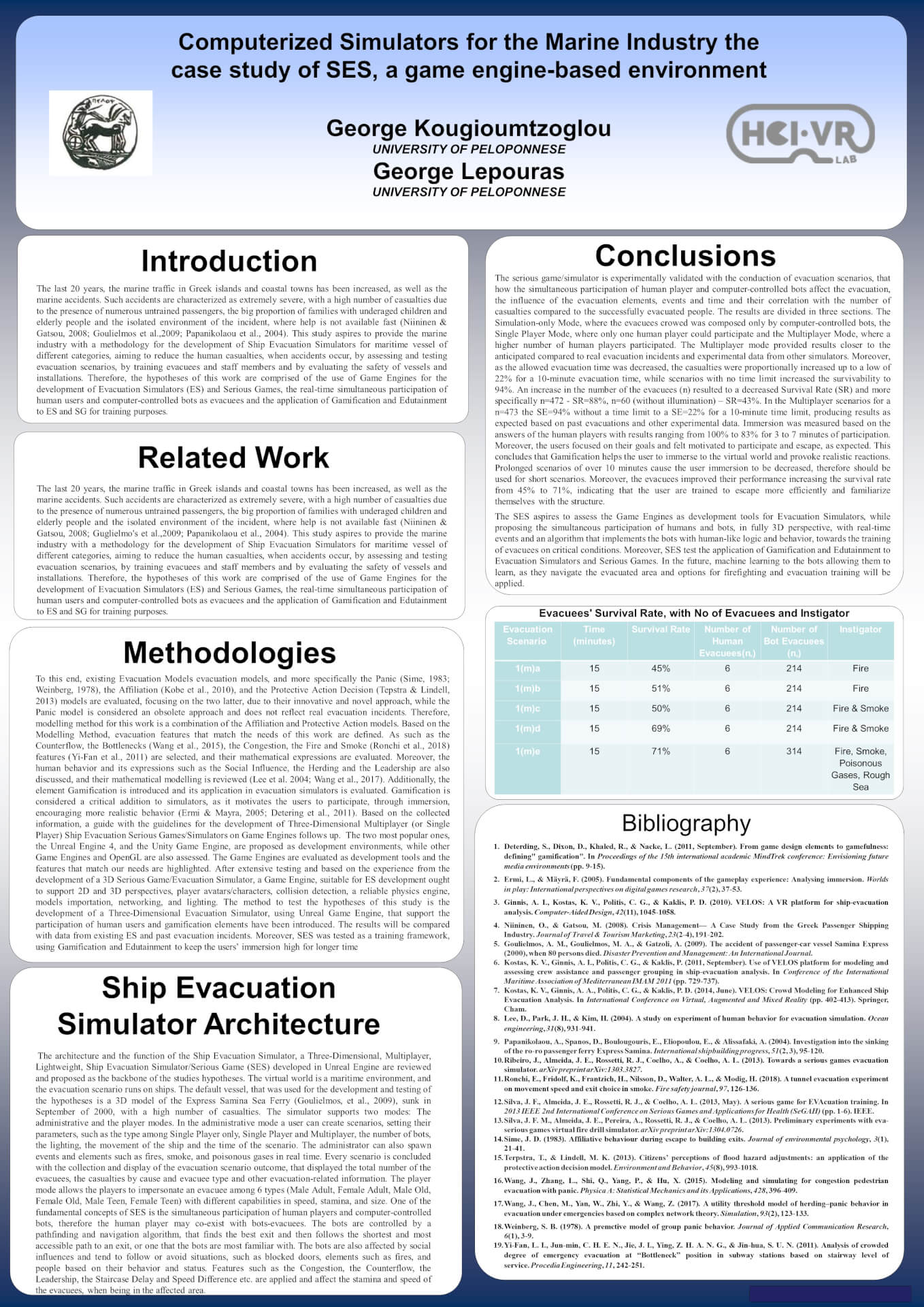